Posted on April 26, 2012 by missionhillschool

FOCUS ON THE WRITING PROCESS
CREATING AN ALPHABET BOOK

Give the pupils something to do, not something to learn; and the doing is of such a nature as to demand thinking; learning naturally results. – John Dewey

The Forbidden City has never looked better! In just a few days the scale model of the Forbidden City will be ready for a public viewing. The children thoughtfully and meticulously chose and researched vocabulary words related to the Forbidden City and designed an “Alphabet Book.” Creating “The Alphabet Book” is not only fun for the students, it was an opportunity to see first-hand how kindergarten and first grade students begin to master the writing process. 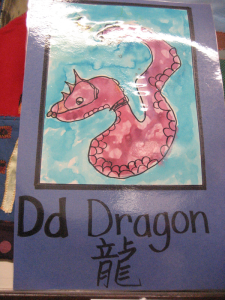 A page from the Alphabet Book.

As the students gathered around Carla Johnson; their first task was to select a letter or word and begin the illustration of the Alphabet book. What could be used to ignite their thinking and help them make thoughtful choices? Although Carla was there to guide them through the process, they formulated their own ideas as they set about their task. For inspiration, they could refer to the “Word Wall”, and a wide variety of printed materials – so much for young learners to choose from! 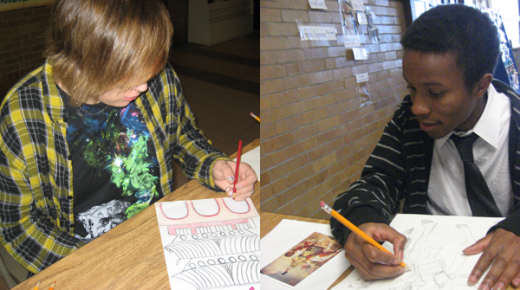 Step 2- Focus on Details
With their idea in mind, the students initiated the writing process which begins with creating an illustration. Sometimes students are attracted to the boldness of the color of markers; however, beginning with pencil allows time to process information, express ideas and thoughtfully sketch details. With each step, they become more invested in the writing process.

Children of different ages work together.

Step 3- Bringing Images to Life
The students made informed choices as they moved from regular pencils to colored pencils. Interesting connections and evolving considerations are the natural outcome of this step of the process. At this step, students are eager to show what they have accomplished.

Step 4- Opportunity to Explore
While colored pencils bring life to an illustration, watercolors provide students with an opportunity to master using a brush and experiment with a different medium. 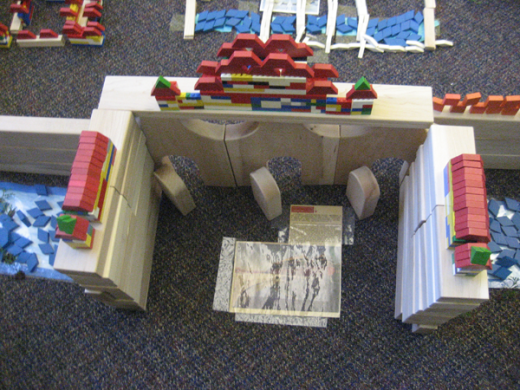 Step 5- Final Touches and Public Display
Once the watercolors have dried, the end product is nearly ready for public display. Young students are excited and anxious to know when their work will be available for everyone to see. And what a display it will be thanks to the superb work of two highly talented and respected teachers, Ms Nancy Yang, Boston Latin School and Confucius Institute Chinese language, and Ms Lucy Zahner Montgomery, co author of the children’s book “Malindi’s Journey”, and history teacher at Brighton High School. They spent the afternoon at Mission Hill writing the calligraphy for the Forbidden City A-Z Alphabet Book, and I had the good fortune to observe and document their artistry in practice.

They used several references: the on-line Chinese-English dictionary for the most accurate translation, and a site that includes audio pronunciation as the stroke order for characters. Both are excellent sites for students to learn the development and practice of Chinese language skills.

The process of creating the calligraphy panels.

I was fascinated by the process Nancy and Lucy used, and it was evident both calligraphers used similar steps and processes that the children used to create their alphabet pictures. Before they wrote the final calligraphy on the pictures, they first wrote the characters with pencil on a practice paper (allowing them to practice the strokes and scale of the characters). They then re-wrote the character with black ink on the same paper to get the feel of the marker pen when writing each stroke, and ended by writing the character on to the alphabet page. 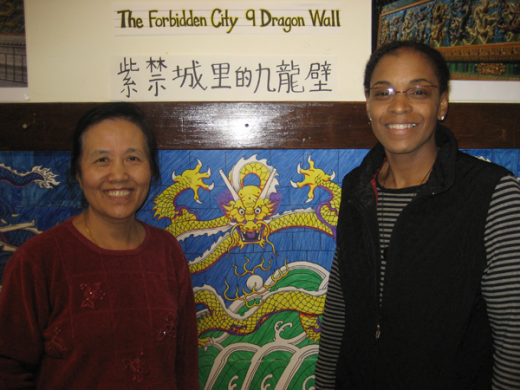 External Affairs Director
View all posts by missionhillschool →
This entry was posted in Uncategorized. Bookmark the permalink.